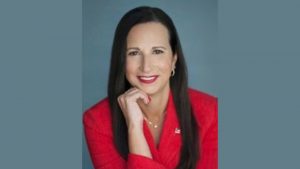 AMIRA FOX is the State Attorney for the 20th Judicial Circuit of Florida covering the Charlotte, Collier, Glades, Hendry and Lee counties.  In 1999, she became the first female head of the Collier County office.

In November 2018, Ms. Fox was elected State Attorney, becoming the third State Attorney, and the first female State Attorney, in the history of the Circuit.  She has prosecuted hundreds of cases including numerous first-degree murder death penalty cases.  Ms. Fox serves as the Secretary of the Florida Prosecuting Attorney’s Association.  She also serves on Attorney General Ashley Moody’s Statewide Council on Human Trafficking and the Supreme Court of Florida Criminal Court Steering Committee.    She is the recipient of the GEM award for excellence in public service, a Leader in the Law award by the Florida Association of Women Lawyers, the Commitment to Justice award from the Fallen Officers Foundation and the Woman of the Year award from the Ladies Leading Right.

Ms. Fox is a member of the Fort Myers Rotary Club, serves on the board of the Shelter for Abused Women and Children, the board of The Foundation for Lee County Public Schools, the board of the PACE Center for Girls and has been a Captain and Event Lead for Relay for Life.  Amira’s husband Mike served with the Collier County Sheriff’s Office for 30 years and they have four children.